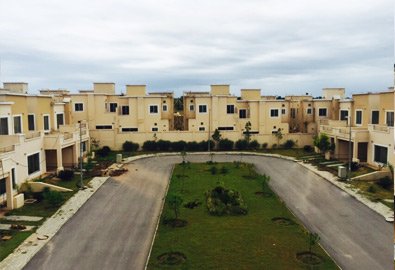 DHA Valley Islamabad was launched on 18 August 2008 adjacent to DHA Phase 2 Extension. The project has written new stories of success and met with the unmatched response from the general public. Heavy earth moving equipment is being deployed at the site to transform the existing landscapes & valleys to a world class township within four years. Development work is almost 90% completed in Bluebell, Oleander sectors.

DHA Valley Islamabad is 5 and 8 Marla Scheme is to primarily meet the aspirations of low-income segments living in Pakistan & abroad. DHA Valley scheme got a huge response and became one of the most coveted projects of DHA Islamabad. The development work has commenced and will be ready for possession as the development completed.

Yesterday Malik Riaz posted photos of DHA Valley latest development on his official twitter account and he seemed quite happy with the progress.

— Malik Riaz Hussain (@MalikRiaz_) August 29, 2016
DHA Valley Islamabad seems to have a very bright future from this year 2016 onwards. The development work is in full swing and it is expected that the society will announce possession of Bluebell, Sunflower and Oleander Blocks this year. As soon as the possession is announced in any of the blocks, plot Prices will shoot up by 2 to 3 time as compared with the current prices which are the lowest in any of the DHA project and even less than any other society in that area.